Skip to main content
March 26, 2021
My new book, Othering: The Original Sin of Humanity, is now available. It was published by Cascade Books and is also available on Amazon.

Othering is a word used in academic circles, but it may be unfamiliar to many laypersons. This work introduces the word, which is a refined way of describing prejudice, discrimination, and scapegoating. The book addresses what othering is, how it has been practiced in varied contexts, and how it prepares the way for violence. Dimensional anthropology is introduced, which is the idea that there are three main dimensions of reality as it is inhabited by human beings: the vertical axis (the Great Chain of Being), the horizontal plane (society), and individual selfhood. Othering can be present within all three of these dimensions, with slavery being an example of vertical axis othering, ethnic violence being an example of horizontal othering, and lone wolf or psychotic shooters being an example of individual othering. The most thought-provoking aspect of the book for many readers will be its application to the culture wars in our current individualistic age. Rights language is also addressed at length, since it can function as anti-othering rhetoric or as rhetoric that supports othering. The largest framework for the book is its argument that othering is a way of illuminating what the theological tradition has understood as original sin.

“Charles Bellinger has provided a powerful analysis of the modes of dehumanization that have tragically marred our civilization. What is needed in our moment of political and ideological polarization is a recovery of the profound wisdom and insight of the doctrine of original sin.”

—Justin Buckley Dyer, author of Slavery, Abortion, and the Politics of Constitutional Meaning

“Charles Bellinger has written a truly magisterial and engrossing tour de force on the central theme of our contemporary world, the radical discord of our age and its many manifestations—political, spiritual, and personal. . . . The transcendent God is not merely among the genus of ‘beings,’ per se, but the Holy Other against whom to harbor a resentment or rivalry (our original sin) effectively derails our golden opportunity to take the ancient confession of the Shema—and the words of the Prophets and Christ himself—to grow into full human maturity, both individually and societally.” 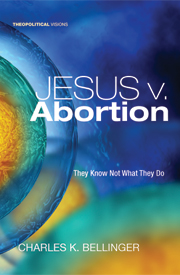 Jesus v. Abortion: They Know Not What They Do is available from: Amazon link and Wipf and Stock link It is written by Charles Bellinger, Assoc. Prof. of Theology and Ethics, Brite Divinity School/TCU You can reach me with comments about the book at: c.bellinger@tcu.edu Overview: There are three main positions that people adopt within the abortion debate: pro-life, muddled middle, and pro-choice. Jesus v. Abortion critiques the pro-choice and muddled middle positions, employing several unusual angles: (1) The question "What would Jesus say about abortion if he were here today?" is given very substantial treatment. (2) The abortion debate is usually conducted using moral and metaphysical arguments; this book adds in anthropological insights regarding the function of violence in human culture. (3) Rights language is employed by both sides of the debate, to opposite ends; this book leads the reader to ask deep questions about the concept of "rights
Read more

December 17, 2016
Brite Divinity School Hooding Talk Charles K. Bellinger Dec. 17, 2016 And the Lord sent Nathan to David. He came to him, and said to him, “There were two men in a certain city, the one rich and the other poor. The rich man had very many flocks and herds; but the poor man had nothing but one little ewe lamb, which he had bought. He brought it up, and it grew up with him and with his children; it used to eat of his meager fare, and drink from his cup, and lie in his bosom, and it was like a daughter to him. Now there came a traveler to the rich man, and he was loath to take one of his own flock or herd to prepare for the wayfarer who had come to him, but he took the poor man’s lamb, and prepared that for the guest who had come to him.” Then David’s anger was greatly kindled against the man. He said to Nathan, “As the Lord lives, the man who has done this deserves to die; he shall restore the lamb fourfold, because he did this thing, and because he had no pity.” Nathan said to David
Read more
November 27, 2019
My new book, The Kierkegaard-Girard Option , is now available. It was published by Mercer University Press, and can be purchased from their website or Amazon.com. Description: In an age of sharply increasing cultural polarization that has led many people to consider retreat into enclaves of the like-minded, this book seeks to persuade its readers that we need better quality conversations across ideological camps, and that the writings of Soren Kierkegaard and René Girard provide very effective tools for facilitating such conversations. The writings of Kenneth Burke are also drawn on, as an important bridge figure who influenced Girard. All three thinkers can lead us to careful reflections on the psychological and social roots of violent behavior, which is a crucially important topic in need of deeper and broader understanding. Disagreements among people of differing worldviews tend to descend quickly into shrill shouting matches, as Alasdair Madntyre predicted in After Virtue ; bu
Read more